Glennon Doyle on Her Podcast and Working With Wife Abby Wambach

In ELLE.com’s monthly series Office Hours, we ask people in powerful positions to take us through their first jobs, worst jobs, and everything in between. This month, we spoke to Glennon Doyle, the best-selling author, founder of the nonprofit Together Rising, and host of the podcast We Can Do Hard Things, named after her signature and oft-repeated motto. Doyle first started sharing her writing on her viral blog, Momastery, where she’d open up about her life as a progressive Christian mother. Since those early internet days, Doyle’s fans have watched her transform on and offline, all while navigating some of life’s hardest—and most beautiful—things. Throughout her three memoirs, she’s written about disordered eating and addiction; motherhood; infidelity; divorce; falling in love with her now-wife, the soccer legend Abby Wambach; co-parenting; and her ongoing mission to share her bravest and truest self with the world. “When we are open and radically curious, we inevitably change,” Doyle says. “That, to me, is victory.” Here, she shares how she’s crafted her career as “an anxious and highly-sensitive person,” the intentional ways she protects her work, and the dream job she still hasn’t done yet.

My first real job that was important to me was teaching. Both of my parents were teachers, and it was understood to be the most important job in the world. I still think that, and I still miss it. Little-known fact: The first book I ever published was a teaching book. My entire class spoke English as a second language, and most of my students were new immigrants. It was when No Child Left Behind was all the rage, and standardized testing was beginning to track kids in profoundly negative ways. I watched that happen to my students, because they were brilliant, but they weren’t able to show their brilliance on these tests. My colleague Amy Greene and I figured out a way to help them beat the tests that was legal. Our school started to use it, and then a bunch of schools in the district, and then it became a book called Test Talk. Teaching is when I saw the effects of institutionalized racism and ableism and classism up close. I had a front row seat to it in a third grade classroom, watching my babies slowly be dismissed before they even got a chance. I think that affects everything that I do. 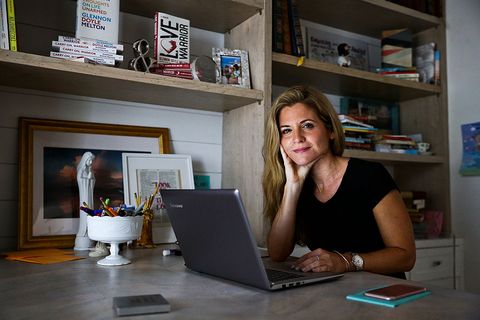 I was a waitress for a while. In most jobs, there’s a set of expectations that everyone agrees upon, and if you meet those expectations relatively, then you get paid, right? With waitressing, that’s not what happens. Every single freaking person that walks in has their own set of expectations for you and how you should behave and what means good service to them. A million times a night, you have to analyze other people’s expectations of you and deliver, hoping to get paid. I don’t know any other job that is so dependent upon the whims of any person that walks in for whether or not you make a living.

Why being a podcast host is perfect for me

I have always been a major introvert. I’ve always said I love people, but not in person. I love humanity, but not human beings. As a super-sensitive, introverted kid, I would get to know people by sitting in a corner and reading Ramona over and over again. And that’s what I do now. I basically do a sweeping book report on every person who comes on the pod. I go for walks, and I think about them, and my [co-host] sister and I come together, and we bounce ideas off of each other. Then [my other co-host] Abby responds to everything in real-time. I recently sent her this meme that said: “Wouldn’t it be amazing to have the job of the podcast host whose only job is to respond in real-time to the other podcast hosts who’ve been preparing?” But that’s why people love her, because she’s in the moment.

The best—and worst—part of working with my wife

Working with Abby means that our life is a continuous conversation. We don’t have any separation between what’s going on in our work life and in our personal conversations—and that’s also the hard part. For example, I realized I was letting a frustration I was having with her on the podcast cross over. We were in a personal conversation, and I was so annoyed, because I felt like she was not being succinct enough. I was like, “Wrap it up, wrap it up.” Then we had to have a talk about how maybe we need to communicate more professionally in the podcast space so that I can say things like that there and not carry it over into the house. My point is that the hardest part is putting on two different hats. Here, we’re colleagues, who also love each other and want to be tender with each other. Then when we’re not on the podcast, I don’t get to boss her around anymore. It’s hard, but I feel so lucky. I wouldn’t have it any other way. And it’s only hard because we’re so careful with each other, because we love each other so much.

Throughout my career, I’ve strategically kept my team very small. There have been a million turns in the road where we could have gotten bigger, but I knew I didn’t want that. I didn’t want to create a monster that I had to feed for the rest of my life. And as an artist and an activist, I needed to be with people who knew that I could blow this for us at any minute, even purposefully; I could say something that would mean it was over. Everyone on my team knows that’s how we live. We will never allow what’s “okay” to say or do dictate whether or not we do it. That kind of nimbleness requires everyone to be so aligned and passionate about what we’re doing. So our whole team is me, my sister, Abby, and our two best friends, Dynna and Allison. There’s a positive side of keeping it so small, but the dark side is that everyone works too hard. We don’t have great boundaries with each other, which is ironic, because we teach about boundaries. We are obsessed with boundaries; it’s just that we don’t believe in them for ourselves [laughs]. So we are emailing and texting each other at two in the morning. But it works for us, because we are a teeny little family.

The way I view mental illness as a strength

I’m constantly finding that the people I like the most—that I think are the most interesting, who are doing the most for the world, the most creative, the most kind, luminary people—are often people who have mental illness of some sort. A lot of people come to addiction because of that deep sensitivity or a yearning for something that is different than what is shown to us in everyday life. The distance between accepting everything for the way it is and yearning for more—though that can lead to quenching that with things that hurt us in the long run—is art, philanthropy, and activism. We can reach for things that hurt us, but when a lot of us figure that shit out, we still reach, and that reaching turns out to be everything that’s good in the world. I think that people who are deep feelers or are anxious are often just people who are actually paying attention. If you’re paying attention, there’s a lot to be anxious about. Having said that, [mental illness] can be a doozy. 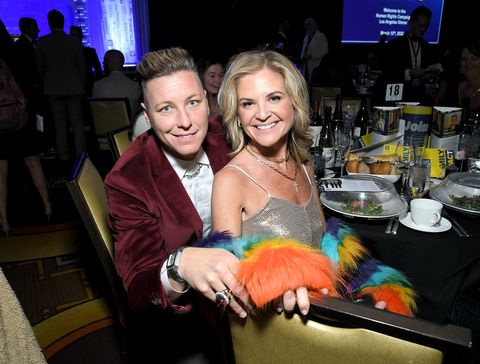 How I refocus after a stressful work day

I’ll go for a walk with my wife. I think that walking saves me every day. I don’t want to exercise anymore in a way that causes suffering; I did enough of that in my life. And I don’t put anything in my ears so that I can actually hear myself think. Then when I get home from that, I usually sit with my dogs. I just love my dogs so much. It’s something about how they’re the only beings who love me more the less productive I am. Everybody else, they say they love you, but they really want you to do shit. The dogs are like, “Please, if you just sit here all day, if you just binge-watch Netflix, if you just stay here, we will love you more.”

I’ve come to believe that life is about evolving. It’s about constantly taking in every conversation, everything you read, every person you meet, every place you see, and allowing it to change you into the next, more beautiful version of yourself. And I don’t think it has to be dramatic. When we are open and radically curious, we inevitably change. That, to me, is victory. But I’ve come to understand that’s not how everyone views life. People will say to me, “How are you so different now than you were in your first book? Are you being honest now, or were you being honest then?” But that was as true as I could be then, and now I’m being as true as I can be now. If I was the same person I was 10 years ago, I would be devastated. I am constantly surprised by myself. Seven years ago, I thought I was a straight, Christian Pisces. Now, I’m a queer, agnostic, [and a little] Christian-y Aries. I found out I’m not even a freaking Pisces. I’ve been reading the wrong horoscopes for 20 years! And I won’t write another book until I’m a new person. So I hope to keep changing.

This interview has been edited and condensed for clarity.

Madison is a senior writer/editor at ELLE.com, covering news, politics, and culture. When she’s not on the internet, you can most likely find her taking a nap or eating banana bread.

Holiday PJs For The Family

5 Controversial Shoe Trends We Predict Will Reign in 2023

5 Controversial Shoe Trends We Predict Will Reign in 2023

Chilly? Cozy Up in These 15 Must Have Plus Size Sweaters!

Confessions Of A Former Fitness Flake