Who Is Adam Shulman? – Meet Anne Hathaway’s Husband and Father of Her Two Kids

From her breakout role as Princess Mia Thermopolis in 2001’s The Princess Diaries to her Oscar-winning performance as Fantine in 2012’s Les Misérables, Anne Hathaway has been a household name in Hollywood for decades. But Hathaway has made a point to keep her personal life private—including her nine-year marriage to Adam Shulman.

Hathaway surprised fans when she exchanged vows with Shulman, then her boyfriend of four years, in a private Big Sur, California, ceremony back in September 2012. She was just 29 then.

Now, nine years and two children later, the couple remains strong, committed, and largely out of the spotlight. So who is Hathaway’s longtime partner? From Shulman’s career to his history with Hathaway, here is everything you need to know about the man who stole the actress’s heart.

Anne Hathaway and Adam Shulman at Hathaway’s Hollywood Walk of Fame star ceremony on May 9, 2019.

Hathaway sensed she’d marry Shulman when she first met him.

Shulman and Hathaway met at the Palm Springs Film Festival in 2008. Hathaway later told Harper’s Bazaar UK in its February 2013 cover story that she told a mutual friend of theirs at the time, “I’m going to marry that man. I think he thought I was a little nuts, which I am a bit, but I’m also nice.”

When asked if she faced any trust issues when they first started dating (Hathaway’s last ex Raffaello Follieri had been arrested for fraud), Hathaway was honest with the British publication. She said: “I was just very honest with him. I knew from the second I met him that he was the love of my life. I also knew that I couldn’t have met him at a worse time… I took my trust out for a ridiculous joyride with him. [I told him,] ‘I believe, because I need to believe, that what just happened to me was the exception and not the rule, and that people are good and you are a good person, because I feel it. And so I am not in a good place right now, but I’m going with this.’ And he has never hurt me. And I was right. It was scary. But as the days wore on it kept on getting better and better. I found that the love I found for him made me more trusting of everyone, and the more I started to see who I had become. I had lost track of myself during those years and I actually started to see who I had become and that’s… that’s when things got tricky and ugly. Having to forgive myself.”

The couple tied the knot in a low-key ceremony.

Hathaway and Shulman had a very California wedding weekend. According to People, more than 150 guests were invited to Big Sur in September 2012. The celebrations started Friday, with a rehearsal dinner at the Ventana Inn and Spa. The ceremony took place in a nearby estate. As far as decor goes, the couple kept it classy and rustic, with decor inspired by nature, a source told People. 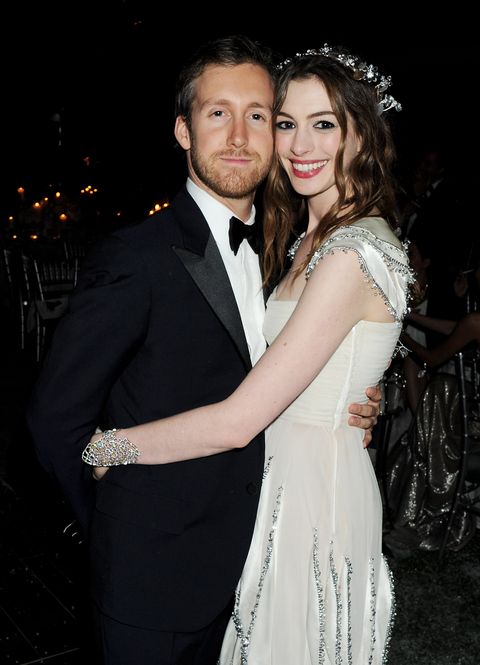 Adam Shulman and Anne Hathaway at the White Fairy Tale Love Ball in Paris in 2011.

Hathaway says being with Shulman changed her for the better.

Hathaway credits her husband for many changes in her life, including her world view. “He changed my ability to be in the world comfortably,” Hathaway told ELLE during an interview for its Women in Washington April 2017 issue. Hathaway said she once cared too much about other people’s opinions of her. “How hard was I tryin?” the actress asked the interviewer as they read a transcript of their past interviews.

But Shulman helped her grow her own confidence: “I’m a different human than I was then,” the actress said. “I think the accepted narrative now is that we, as women, don’t need anybody. But I need my husband. His unique and specific love has changed me.”

Shulman is a “spectacular” dad, according to Hathaway.

Almost four years after the couple tied the knot, they welcomed their first son, Jonathan Rosebank Shulman. He was born in March 2016. Two months after she gave birth, Hathaway praised Shulman’s parenting skills: “As was to be expected, he is spectacular,” she told Entertainment Tonight.

The Oscar-nominated actress later surprised her fans in the summer of 2019 when she shared a rare personal Instagram post announcing her second pregnancy. “It’s not for a movie… #2,” the actress shared with her followers. The couple’s second child, a boy named Jack, was born in November of that same year.

He is a jewelry designer and used his skills to craft Hathaway’s engagement ring.

Ever wondered who designed Hathaway’s emerald-shaped diamond engagement ring? It was Shulman. The New York-native is a jewelry designer—and he even has his own jewelry brand called James Banks Design. According to the brand’s website, the pieces are handmade from recycled material in Southern California. “Through initial discussion, pieces are dreamt of, invented, designed and then methodically brought to life,” the brand’s website says. 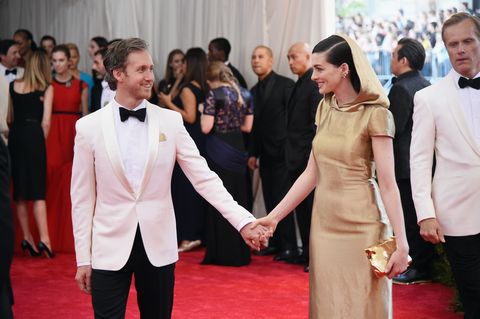 Anne Hathaway and Adam Shulman at the 2015 Met Gala.

He is a film producer.

In 2014, Shulman collaborated with Hathaway to produce Song One, an indie drama film starring the actress. “At first, I was curious how it would go. People always say don’t work with your spouse. But I loved working with him,” Hathaway told People. “ He’s really good at this, and he’s a wonderful producer. And I feel like I actually learned a lot from him in the process.”

He’s no stranger to the acting world.

Shulman graduated with a B.A. in theater from Brown University. According to IMDB, he has five acting credits under his belt, including his role as Paul O’Bannon in the NBC show American Dreams.

He has received the seal of approval from Emily Blunt, one of Hathaway’s close friends.

Hathaway counts her The Devil Wears Prada co-star Emily Blunt among her closest friends in Hollywood. And Blunt adores Hathaway and Shulman together. The British actress told ELLE in March 2017 that Shulman “has been Annie’s greatest achievement in many ways. He’s sort of home away from the storm of fame that she lives with. Being with the right person has been a major part of her growth, but I don’t think she cares as much anymore. That’s something both of us feel now: Who fucking cares? You get to a point where the stuff that you used to sweat just doesn’t matter. It’s a great place to be.” 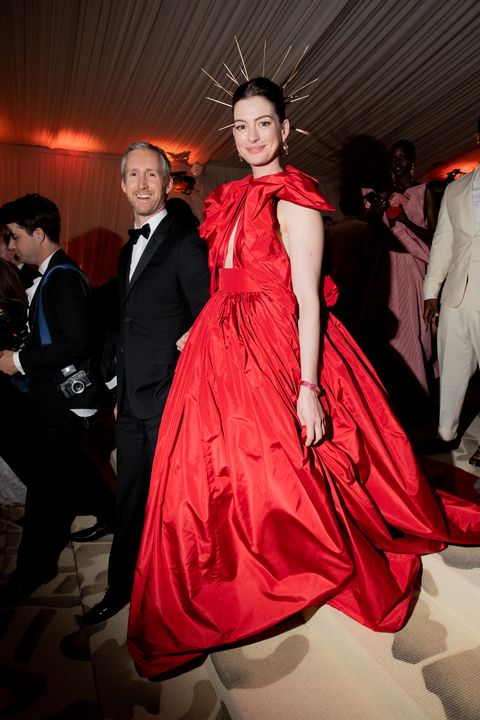 Adam Shulman and Anne Hathaway at the 2018 Met Gala.

At the beginning of the pandemic, Schulman maintained a sense of humor about Hathaway’s anxiety-driven habits.

Hathaway appeared on Jimmy Kimmel Live in October 2020, during which the host asked how she and her family approached safety at the beginning of the pandemic. Hathaway told Kimmel, laughing, “It’s so embarrassing. I don’t know what I was thinking, but you know those little magical thoughts you have that keep you going, that keep your anxiety at bay, and it’s like, ‘As long as I do this thing, everything’s gonna be fine?’ So I decided that it would keep my family safe if I put tape around all of our light switches and our doorknobs because…these are the most oft-touched surfaces, and we’ll just remember to wash our hands and put Lysol on them. And I remember I did this and my husband came upstairs, and he saw what I’d been working on, and he was like, ‘What? Why?’…And he continued to make fun of me.”

She also mentioned how “wearing a really sensible pair of heels” inexplicably made her feel safer. “[That feeling] lasted exactly five hours,” she says. “And, again, it gave my husband—my husband teased me about it yesterday.” When Kimmel asked if Schulman did anything strange during the early days of the pandemic, Hathaway responded, shaking her head, “Ugh. He’s so perfect. I know I shouldn’t say that; it’s too much pressure. But he’s a really easygoing guy, so he usually hits the bullseye pretty right. I’m the one that spins out a little bit. I’m very lucky I married him.”

They aren’t sure if they want to have another child.

During the same interview with Kimmel, Hathaway revealed that she hasn’t decided if she and Schulman will have another baby. “Yeah, I don’t know,” she said. “I don’t know. Like, some minutes I’m like, ‘Yes, absolutely,’ and some minutes I’m like, “The world scares me too much,’ and I think I’ve got two healthy ones and that feels really great. So I don’t really know yet.” 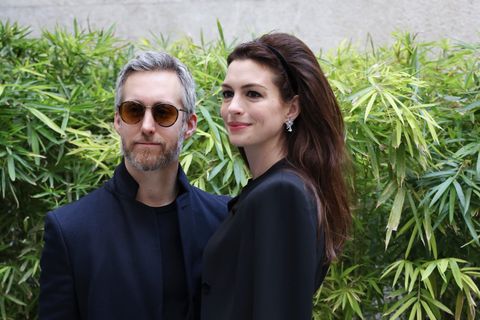 The couple have started making more public appearances together since lockdown.

The two were recently spotted together at a trio of events, including the opening of The Music Man on Broadway, a casual date at Soho House in New York City, and in Milan at the Giorgio Armani fashion show during Milan Fashion Week.

They support political participation together.

Hathaway shared a photo of herself with Shulman and some friends in support of the constitutional right to vote. The Polaroid shot showed the actress in a long black summer dress, with Shulman’s arm around her. he’s wearing light jeans, a striped polo, and holding a black hat.

Yes, they know everyone thinks he looks like William Shakespeare.

A fun fact about the actress is that her name, Anne Hathaway, is shared with the wife of William Shakespeare. Hathaway has always had some issues with her name, wanting to be called “Annie” as a child.

Anne Hathaway Has Regrets About Her Name 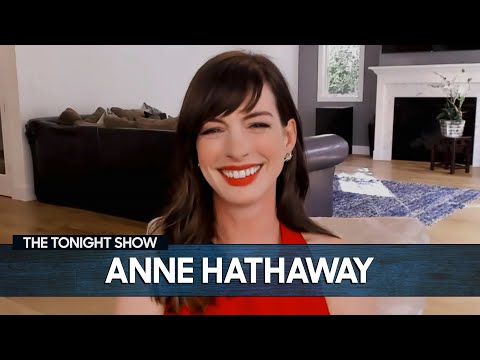 What’s in a name?

Well, in her case, there might be a hint of fate. In 2019, Hathaway addressed the viral conspiracy that Shulman resembled Shakespeare on The View, mentioning that some people joke they’re the couple reincarnated.

In 2022, for Interview Mag, model Bella Hadid asked Hathaway about it again, saying, “So Anne, this is the big talk of the town. The people say that your husband Adam looks just like William Shakespeare and that you look just like his wife, also named Anne Hathaway, married in 1582. Would love and die if you could tell me here first, if you are truly a time traveler and your thoughts on this?”

“That is actually the most adorable question ever,” Hathaway replied. “And he does look like William Shakespeare, doesn’t he? Ongoing situation but will update you when I see you.”

Maria is a freelance writer based in New York City who works in the media industry. When she isn’t working, Maria loves exploring small cafés in the East Village, watching 2000s romcoms, and going on long walks while listening to One Direction.

Lauren Puckett-Pope is an associate editor at ELLE, where she covers film, TV, books and fashion.

Coats To Get To Know

Day To Evening Styles With Saks

Looking for a Plus Size Faux Fur Jacket? Here are 20!